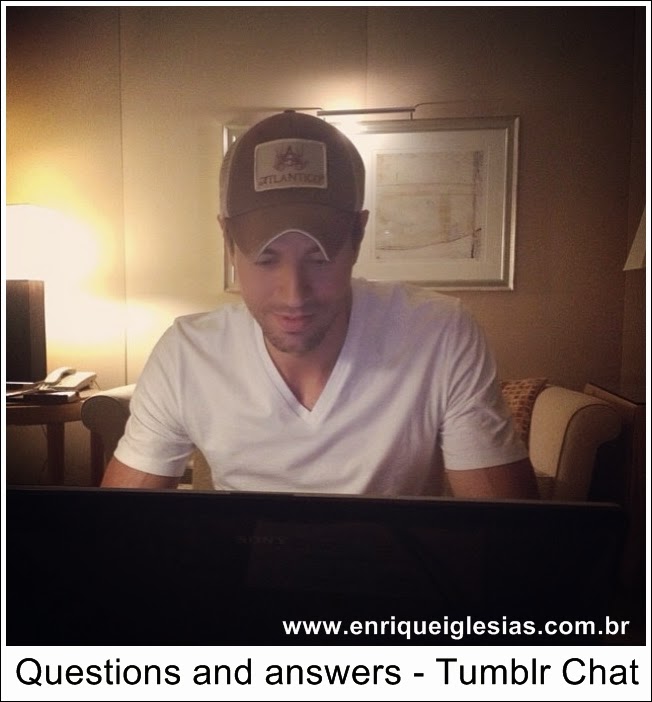 1.    Question by catarina8000:
What was the last track that you recorded in the studio? FOLLOW ME PLEASE! ❤️ 59
Enrique: i’m still in the studio!!! working on a english version of #Bailando  just followed you….

2.    Question by love4chair:
What's your favorite song on SEX AND LOVE?
Enrique: each song is so different… can’t have a favorite but I’m really liking Bailando and Let Me Be Your Lover right now

4.    Question by luvsunshine77:
Do you have a special journal where you write your songs? There are so many beautiful songs on this album!
Enrique: Yes it’s in my head

5.    Question by ioanna78:
When will the Bailando video be released? Joanna from Canada
Enrique: I’m not sure but very soon.  Have you heard the song?

6.    Question by mrsion718:
I think you have a public bathroom fetish.. That being said, where was the craziest place you ever did the deed?
Enrique: probably…. what do you mean by deed?  that can be interpreted a lot of different ways…

7.    Question by glcrose:
What is your best funny moment in #imafreak music video ?
Enrique: There are so many funny moments, like when the dancers are getting covered in chocolate.  I cracked up when the guy in the speedo jumped into the pool.  It was freezing that night but he was a good sport.

8.    Question by glcrose:
Would you ever get a tattoo?
Enrique: Who says I don’t have one… maybe you just haven’t found one…

9.    Question by valerielovesenrique:
Enrique, is your tour with Pitbull in the US only, or also in Europe?
Enrique: Just US for now.

10.  Question by livin-la-vidamocha:
When did you have your first kiss, Enrique?
Enrique: when I was 13

11.  Question by jessjessenrique:
Hi Enrique! Are you able to take Jack and Lucas to some places when you tour?
Enrique: I’ve taken Lucas to my shows in Miami, but it too tough to take them on tour.  I really wish I could.

12.  Question by jessjessenrique:
Hi Enrique! Will there be any surprise guests on your upcoming SEXANDLOVE tour?
Enrique: There will be plenty of surprises I’m sure… but if I told you, wouldn’t that ruin it?  Keep your eyes covered, then maybe you’ll find out you have a pair of beautiful legs behind you…

13.  Question by celestemaraisblr:
Dashboard Confession: Very personal question. How old where u when u lost your virginity? And no, you are not still a virgin.....lol. Thinking of your and Pitbull's interview with George Lopez.
Enrique: How do you know I’m not?

14.  Question by nouranhassan:
Have you ever visited Egypt ?
Enrique: Yes I have… my manager has a really good photo of us at the pyramids.  He has it as his phone cover. I’ll see if I can get a shot of it.

15.  Question by celestemaraisblr:
Dashboard Confession: U sometimes wear sunglasses when u are inside a studio or radio station during interviews, why? Ones eyes are the window to ones soul and u have both beautiful eyes and a beautiful soul. Don't hide it.
Enrique: because I probably haven’t slept…

16.  Question by patticake105:
Wondering are you a neat or messy person at home? Do you have any other hobbies then work & music ?
Enrique: I’d say I’m pretty neat.  Yes, I love going out on the water, I like surfing and love flying.  I once sat on a sea plane pontoon going 100 mph at 200 ft.  I’m trying to find that picture.

17.  Question by luvsunshine77:
What do you do while you are flying? You obviously spend a lot of time in your plane!
Enrique: pretty much the same thing everyone does… eat, watch movies, sleep… sometimes I stick pieces of paper up my friend’s nose.  I have a video of that too… let me see if I can find it.
Por EnriqueBrFans às 21:00
Enviar por e-mailBlogThis!Compartilhar no TwitterCompartilhar no FacebookCompartilhar com o Pinterest
Postagem mais recente Postagem mais antiga Página inicial