Enrique's article in the newspaper in India.
Thank you @csavagaon for the picture. And thank you ‏@nehaenrique for the complete article. 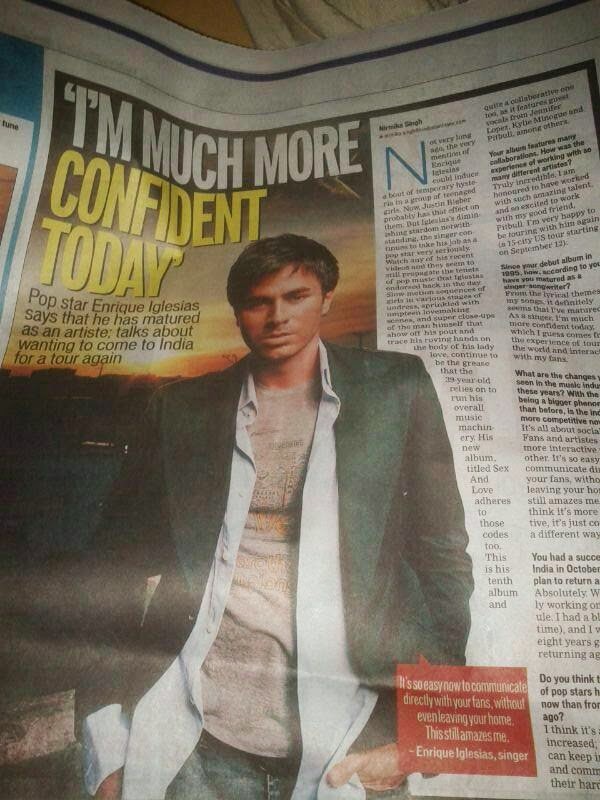 Mumbai, May 31 -- Not very long ago, the very mention of Enrique Iglesias could induce a bout of temporary hysteria in a group of teenaged girls. Now, Justin Bieber probably has that effect on them. But Iglesias's diminishing stardom notwithstanding, the singer continues to take his job as a pop star very seriously.

Watch any of his recent videos and they seem to still propagate the tenets of pop music that Iglesias endorsed back in the day. Slow-motion sequences of girls in various stages of undress, sprinkled with umpteen lovemaking scenes, and super close-ups of the man himself that show off his pout and trace his roving hands on the body of his lady love, continue to be the grease that the 39-year-old relies on to run his overall music machinery.

His new album, titled Sex And Love adheres to those codes too. This is his tenth album and quite a collaborative one too, as it features guest vocals from Jennifer Lopez, Kylie Minogue and Pitbull, among others.

Question: Your album features many collaborations. How was the experience of working with so many different artistes?
Enrique: Truly incredible. I am honoured to have worked with such amazing talent, and so excited to work with my good friend, Pitbull. I'm very happy to be touring with him again (a 15-city US tour starting on September 12).

Question: Since your debut album in 1995, how, according to you, have you matured as a singer-songwriter?
Enrique: From the lyrical themes of my songs, it definitely seems that I've matured. As a singer, I'm much more confident today, which I guess comes from the experience of touring the world and interacting with my fans.

Question: What are the changes you've seen in the music industry in these years? With the Internet being a bigger phenomenon than before, is the industry more competitive now?
Enrique: It's all about social media. Fans and artistes are much more interactive with each other. It's so easy now to communicate directly with your fans, without even leaving your home. This still amazes me. I don't think it's more competitive, it's just competitive in a different way.

Question: You had a successful tour of India in October 2012. Do you plan to return anytime soon?
Enrique: Absolutely. We are currently working on the schedule. I had a blast (the last time), and I will not let eight years go by before returning again.

Question: Do you think that the shelf-life of pop stars has decreased now than from, say, 10 years ago?
Enrique: I think it's actually increased; now artistes can keep in touch directly and communicate with their hard-core fans.