Enrique was interviewed by another Brazilian magazine after his concert in Argentina.
Check out the interview for the "Contigo" magazine: 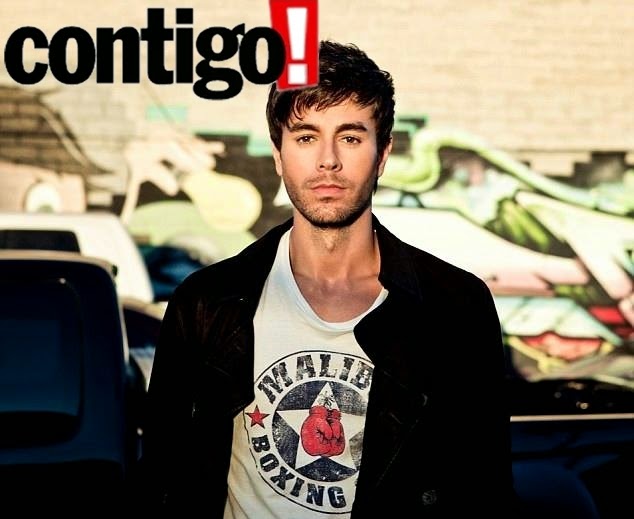 Yesterday in your concert, you kissed one of your fans. Do you always kiss your fans?
Enrique: Yes, I do! I do it for gratitude to people who wait for me, for example, twelve hours outside of a hotel... They pay to watch me sing live or buy my music. They are people who work hard and still support your work and loves you. Without my fans, I would not be here, I honestly would not know what to do about my life... They make me the happiest person in the world.

Anna Kournikova, your girlfriend, does she matter?
Enrique: She loves my fans and she knows this is my job. I love her, above all, but also love my fans.

Have you ever written a song about her?
Enrique: Actually, I never tell for whom my songs are written. It's a kind of superstition! I started writing songs for not having the courage to say certain things in people's faces and started to put these feelings on paper... Over the years, became a mania and then I never talk about for whom they are made.

Do you think about marriage?
Enrique: I'm not against marriage, but I think he is not as important to me as it is for other people, for example. I think getting married would not change the way I feel about my girlfriend ... And I don't know if that would make me happier, I mean, if it happens in the future, it will happen, but I think at this moment of my life and of her life, it is not important.

The name of your new album is ‘Sex And Love’. Why?
Enrique: Oh, that's simple, some songs are about sex and another songs about love, and other songs about both. Sex and Love are two words that anyone can relate to, no matter the nationality or age.

And what do you prefer? Sex or Love?
Enrique: Sometimes sex, sometimes love. I think both are important for a relationship.

What song on the album you like most?
Enrique: Probably, "Bailando" because it's the most addictive. I love listening to it, I don't get tired to listening this song, you know? Normally I don't listen to my songs. I hear when I'm in the process of creation, of course, but not when I come home, for example, and I listen my album, and this is different.

‘Bailando’ is your song with Luan Santana, right? Why did you choose him for this song?
Enrique: I knew who is he, because he is very famous outside of Brazil and I have a lot of friends who are his fans. So I just sent him the song, and I waited to see if he liked it or not. I would like he get interested, and he liked it! Then, we started the recording process. It was a great thing to be done!

Have you met him already?
Enrique: Actually, I met him through Skype! We talked there many times, and this is great! I could know him better, know about his true. This way, we recorded the song. I love his work, I think, in some way, we are very similar, especially the ballads if you compare the beginning of my career with his career.

Would you like to concert in Brazil? Do you have plans?
Enrique: I would love to. Definitely, it should happens sometime.

At this moment, are you focused on a lot of concerts with Pitbull, isn't?
Enrique: Yes It will be very fun, we sang together many times before. I think the fans can expect much energy and many good times! I'm excited.

Are you anxious to go on tour with him again?
Enrique: Oh, I've done so many concerts with him... I'm just afraid he involve me in some trouble, because he likes to stay up late and he is a kind of guy who doesn't no limits, he likes party all the time, he just like party and party. I always try to make him stop, but he can sleep three hours and he feels ok, everything is ok.

Are you guys best friends?
Enrique: Yes, we are best friends. He frequented school with me and we are very close. We go out together in Miami, where I live.

Why don't you dance in your concerts?
Enrique: Oh, I'm a terrible dancer! I dance like a guy who is trying to dance... But look, I'll think about it, this thing about to take dance lessons. I'll see if my manager, who is a great dancer, teaches me something.

People are saying if Spain wins the World Cup, you will get naked. Is this true?
Enrique: Yes! This is true! A bet is a bet and I always keep my word in the bet what I do. I'm a little afraid, is true, but I will make it.

Who do you think will win the World Cup?
Enrique: Oh, nobody knows who will win, but I imagine the favorite country of everybody is Brazil, because Brazil has one of the most consistent teams, some of the best players, Brazil was champion five times and the World Cup will be performed there.